DjangoVillage event is a unique and unusual project in Nephila's working profile for two reasons. In the first place, we did not provide web services to a company, but instead have set up an event. Moreover, in this specific case, we have had to operate in a far more extensive and complex area than usual. We not only worked on the technical aspect of the project and graphicsbut we also had to manage organisational and logistical aspects.  It was a big challenge but we are proud and satisfied with the result! 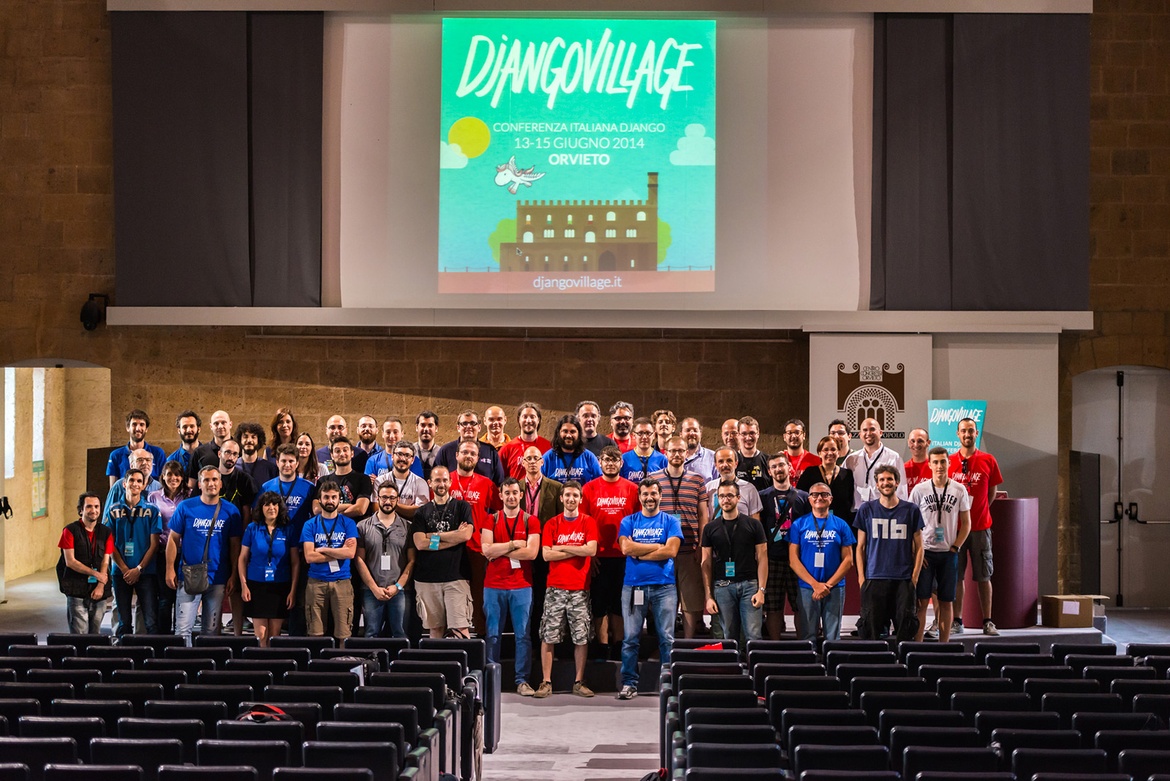 DjangoVillage is an event addressed to the users of Django, the famous open source framework. Its goal is to engage both the beginners and the more experienced users of this technology.

DjangoVillage is a technical conference to discuss in depth some specific issues involving and affecting the technological community. The event is being shaped on the basis of the existing conventions sui generis. The program consists of three different kinds of activities:

The first edition of DjangoVillage was hosted in Orvieto, in 2014 from the 13th to the 15th of June.

In this specific case, the client was not a company but theOrganising Committee of the conference, in which Iacopo and Emanuela participated with other supporters and users of Django.

The preparatory work for the event had been informal. We met in a restaurant over a delicious local cuisine to discuss the logistics of the event and brainstormed over who can contribute what. The committee members, who participated, shared similar work profile and some of them, which owned a company, could involve their organisations in the project. The meeting concluded on a successful note with a systematic work allocation for all the members.

We belong to the same technical community and thus we had an opportunity to meet in conferences such as EuroPython and Djangobeer event which was hosted by Nephila in June, 2013. During the DjangoBeer event we came in contact with partners of Evonove company who shared with us their idea. They wanted to create a bigger event, designed specifically for djangonauts and Django.

Meanwhile, Patrick Arminio and other guys involved in the organization of Python conference shared the same interest and thus were enthusiastic to build a Django conference at a national level. And this is how the idea to create a meeting point for the Italian Django community was born. Wedidn’t want to create an academic conference to indoctrinate the participants. Our wish, instead, was to create a place where everyone could have the opportunity to exchange knowledge, information and experiences.

So we can assert that in this context we did not coordinate with a standard customer. The format, instead, was created and built together.

We formed an organising committee, hosted by Thinker Garage association, which allowed us to manage all the bureaucratic aspects of the event. We can assert that the event was a knowledge investment created with the aim to promote and spread the use of Django in Italy. The members of the Committee attended all on a voluntary basis and and according to our agreement we set aside a fund which will be utilized for further conferences or initiatives on the subject.

What did we do

We managed activities both in Visual Communication field and general support in other areas (sponsorship, speakers, etc.).

In particular, we developed:

The graphic image was created by our visual designer, Guido, which is one of the important features of the event. Guido chose to adopt the minimalistic style: pastel tones, solid colours which blended well to communicate the freshness of the event. At first there was no distinction between logo and the image. All the components of logo and images were brought together. Logo and graphic image were separated only later, when we developed the accessories for the conference. 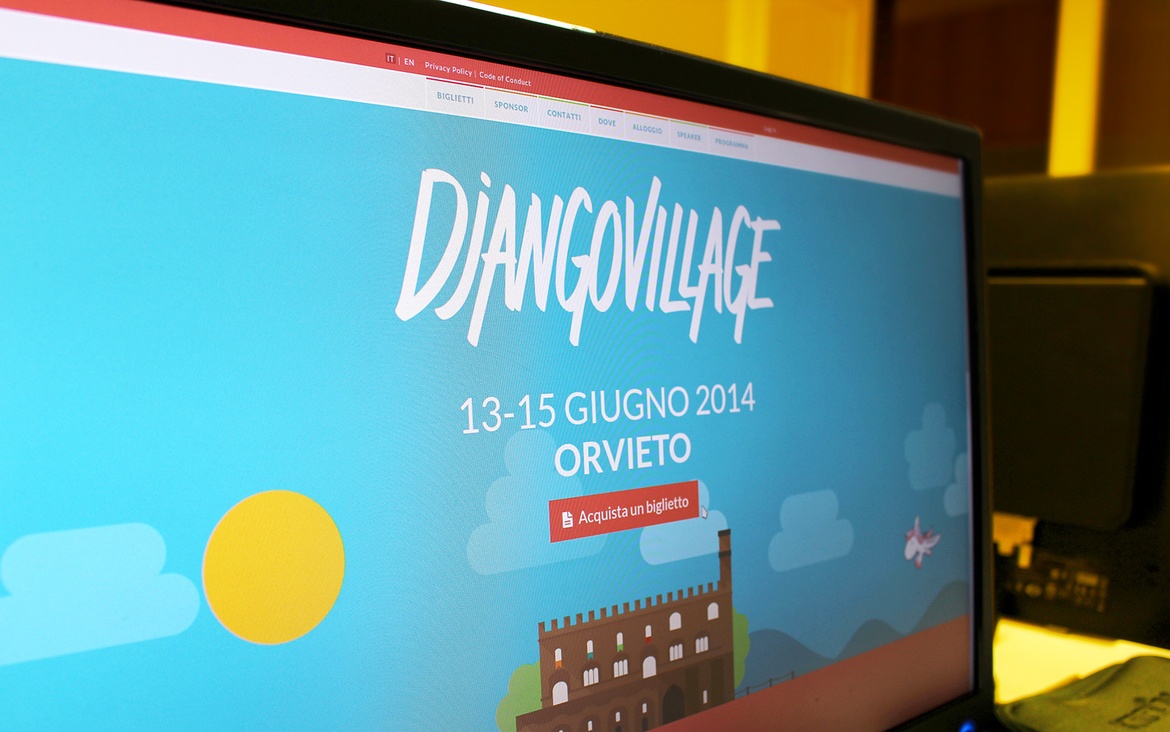 To build the website for this conference, we decided to adopt the version 3.0 of django CMS application. django CMS is our “workhorse”. As it allows managing agilely enormous amounts of data, we employ it to build all those projects within which content management plays a key role.

3.0 version, in particular, is more intuitive than previous versions and this is why we chose to use it for DjangoVillage project. In fact, it allows to administrate all the contents directly from front end editor interface and thus the user can monitor the application behaviour without an effort. django CMS, moreover, has been integrated with some other open source applications, designed specifically for technical conferences anddeveloped bythe Italian Python community.

As the conference was open both to Italian and foreign djangonauts, the multi-lingualimplementation was immediate.

We wanted a website with different levels of access, which could provide basic infos to non registered members and which could offer further functionalities to logged in users. Once a visitor enters user name and password, he/she can purchase the conference tickets, vote the talks proposed by various speakers and consult for queries on accommodation and reservations with hotels and restaurants.

DjangoVillage website is flexible: both the sections and the menu items, in fact, can be enabled or disabled as needed.

We love to collaborate with other djangonauts to build projects with advanced functionalities and this website was designed with this perspective. DjangoVillage is an open source project, we carried out the structure of the website internally, but we also cooperated with some members of the Technical Committee, who provided technical support in respect of integration with Python applications.

We chose to conclude our project by recounting the conference developments through a photo-reportage. We opted for a fresh and dynamic style, which conveyed the playful spirit of DjangoVillage. You can take a look at the gallery in this section. 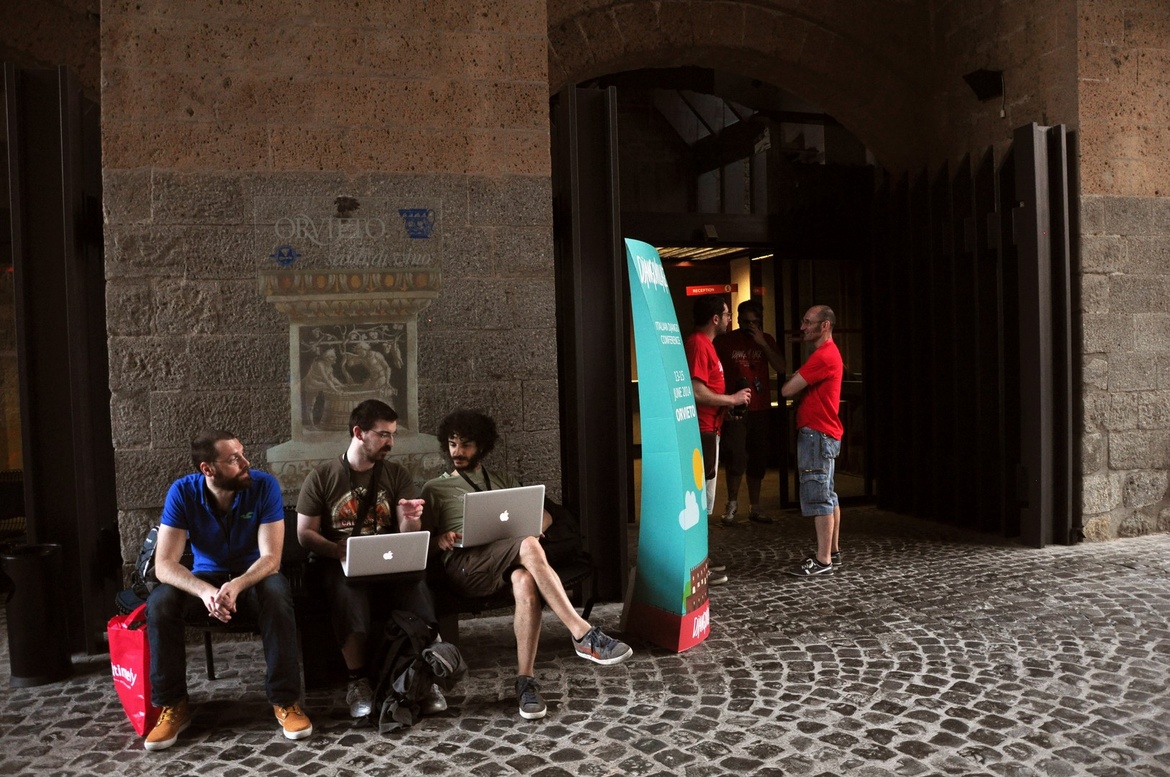 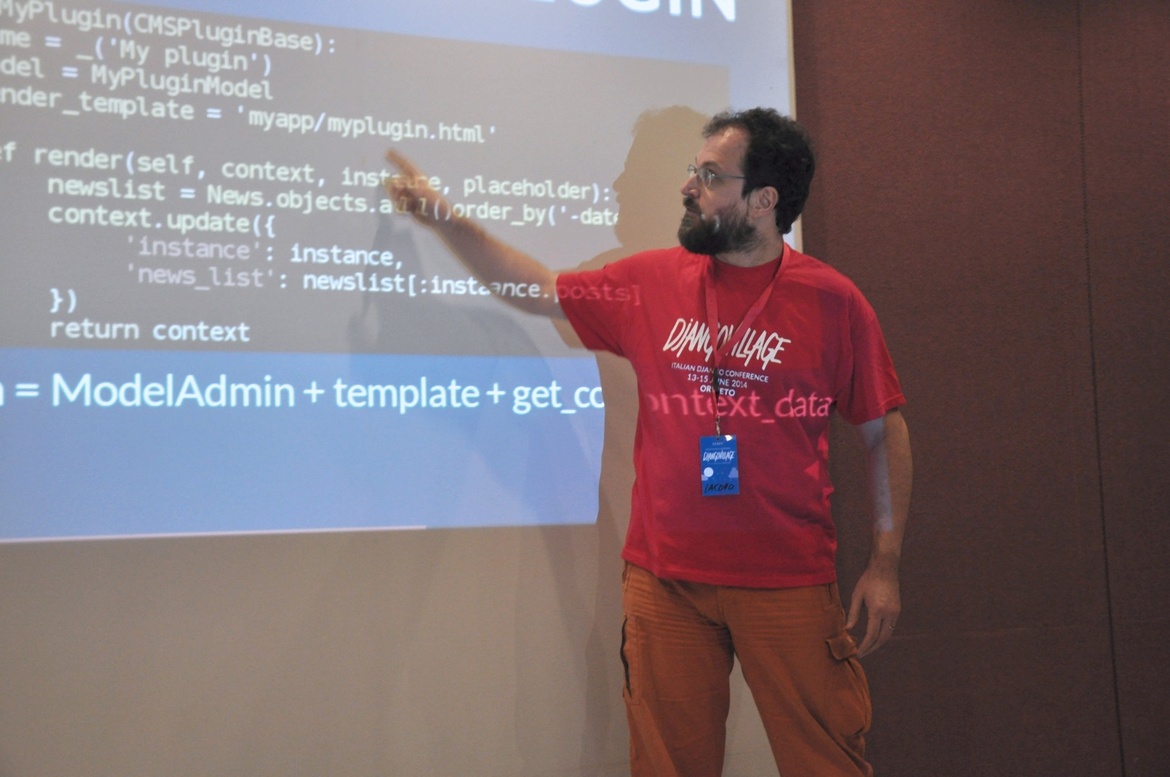 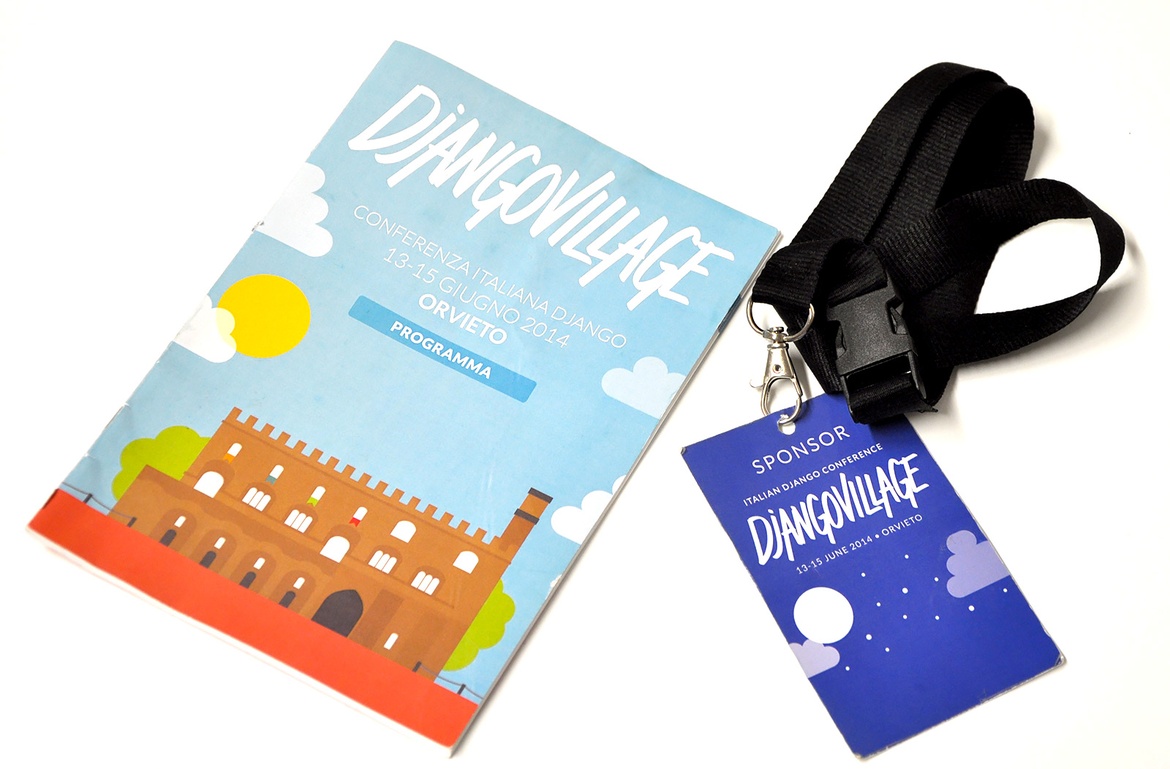 After deciding what to produce - conference badges, T-shirts, and programs – we carefully selected the suppliers and thought about the operative plan at the same time. We organized the graphics, the printing and the shipping.

The style (image and colours) which we used for the communications tools was inspired by the logo.

The “must have” for participants in technical conferences is the badge, usually large. Very large. We designed two versions, one for the participants and other for guests. While the first was composed respecting the original graphic image, the latter was a “night” version of that image, with starry sky and moon in place of clouds and ponies.

We also designed the program, a book of 22 pages containing all the necessary infos, the list of the talks and of the sponsor. We took care of the graphics, layout and printing.

The most delicate thing was t-shirt design. In this case too, we created two versions, one for the participants and another for the speakers. The critical point was to find a compromise between the costs and the quality of the materials. But in the end everyone was satisfied! 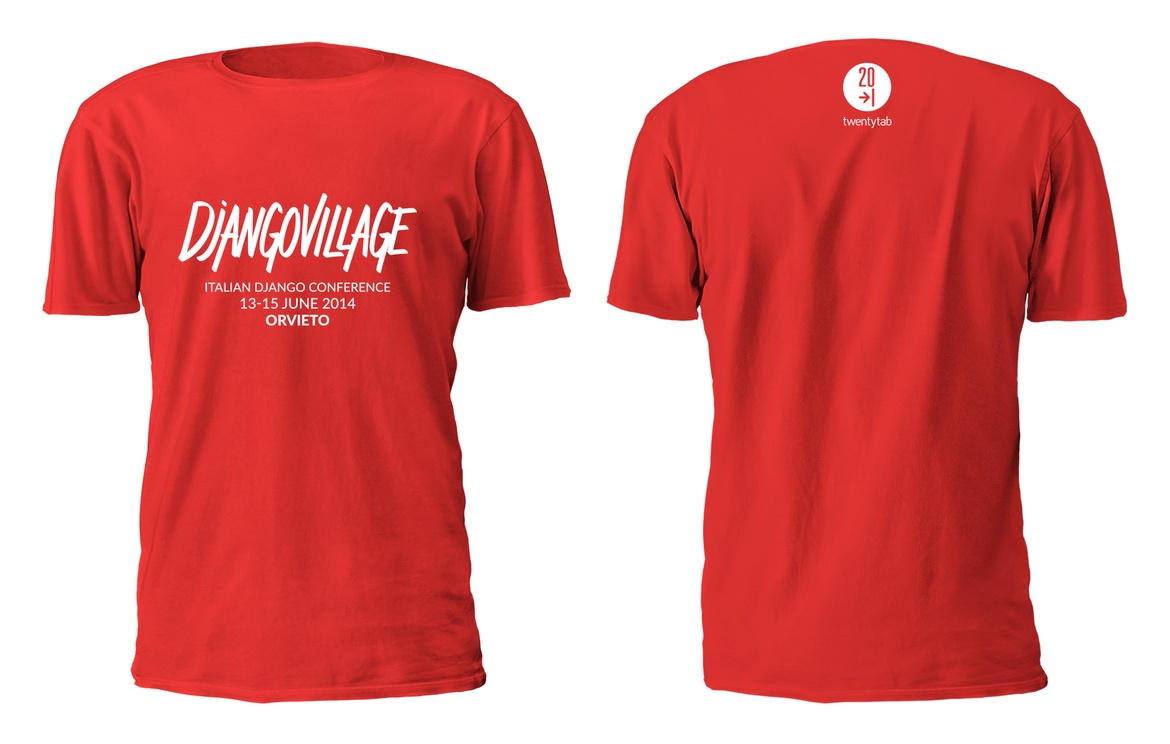 It was our first conference with a national relevance and the first official Django conference in Italy. We wanted to take care of every minute detail. The conference was successful and we were complimented by many participants who appreciated our effort.

After this event, we were asked to take part in the organization of the national Python conference in 2015. We are now engaged in the creation of the website, which will come to light soon (you have to wait only till November 2015).